This race report will be quite short. And the reason why is simple: It is not too much to tell about todays race, the Circular IV Extreme Villa de Moya.

I decided to run the race last minute, but thanks to the race organizers, I got everything sorted out and I was able to pick up my start bib on Saturday morning before the race.

Circular IV Extreme Villa de Moya starts and finishes in the city of Moya, and it’s 34 kilometers long with 1.600 meters of elevation gain. For me, the race ended up being a bit longer…

It all started well, and I felt very strong. I ran in the front group with Zaid Ait Malek and Yeray Duran for nearly two thirds of the race. Then, Zaid and I took a wrong turn. We found the course markings again after a minute or two. Ten minutes later we took a wrong turn again. We had to do a detour, and I guess we lost three or four minutes. Meanwhile, Yeray had passed us and was leading the race. I saw Yeray a couple hundred meters in front of us, and pushed as hard as I could to catch up. Then, for the third time, Zaid and I ran passed a sharp right turn and down a tarmac road. After at least 1,5 km. we realized that somethings wasn’t right and ran back up again. I have to admit that I lost the motivation after going off course for the third time. I was now in seventh place and decided that this wasn’t a race for me anymore, just a solid training run. I crossed the finish line after 3.35 in fifth place. My Garmin showed that I had run 38,3 km. So, today I ran four bonus kilometers 🙂

Congratulatons to Evaristo Almeida, Yeray Duran and Domingo Juarez for making the podium!

I would love to run the race again, since the course is challenging and very technical in some places. I hope that the course markings will be a bit better next year…

Yeray, Zaid and myself. Photo: circularextremavillademoya.com 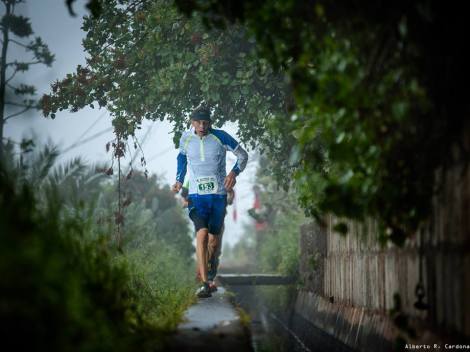 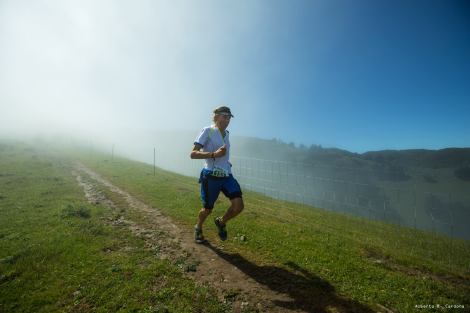